I see the appendage of a tree, stripped bare like bones ravaged by natures scavengers. I see the rock, ancient, towering and monumental. It is grey synonymous with the old. I see death, sadness and forlorn without hope. Much like the faces of those looking out from within. The land is gripped in Winter’s hold. It is cold and foreboding. All recoiling from her icy touch. 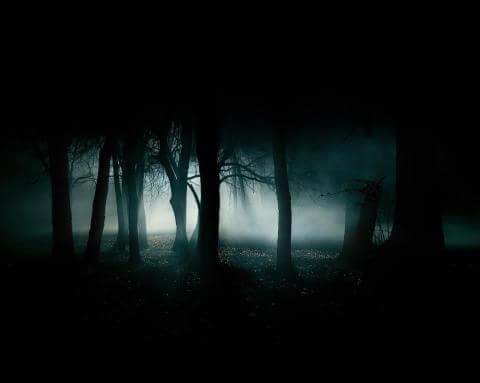 I walked what seemed like hours in the darkness
Taking re-assurance from the texture of uneven bark between my fingers
The trees, some three times my age, guided me
Like an old man holding gently the hand of his grandchild
I walked towards the light that hung in the air like some ghostly apparition
With a beauty most haunting it gave me chills
Was I heading towards salvation from the colour of the night
Or a prelude to my own eternal darkness

Herbert looked at himself in the mirror. He was changing. Unlike his best friend Amelia, who grew taller and older with the passing seasons, he was still the little boy he had always been, just a little more transparent. Amelia was the only one that could see him when he first arrived, but it seemed now more and more he was becoming invisible to even her.

The word for this challenge was:
Tongs, and genre: Sci-Fi.

The intercom returned nothing but silence, just as it had done every time the same question had been asked for what had been a hour.

RO15, less formally known as Research Officer Jacqueline Miles, had transported aboard the strange floating ship escorted by a security team in the hopes of discovering if, or what, occupied the vessel. Attempts at communicating proved unsuccessful.

The information reported back, up until the point of radio silence, had been that the ship had been abandoned, with all escape pods deployed, though there was an uneasy sense of not being alone.

Several minutes past in silence, until a definite buzz of interference came of the intercom. Again the question was asked,

Another more sustained buzz replied, this time however, interjected with a croaky gargling female voice.

“Romeo Oscar One Five, can you repeat. Communications breaking up. Did you find something?”

What followed was a horrifying scream, the last communication with RO15, Jacqueline Miles.

I opened up to my FB friends and family once again to offer me a single object and a genre in which to fit it in. Second up:

“So you say you’re being haunted by a creature that floats in midair, with long tendrals hanging from a gelatinous disc like body!”

“Exactly,” confirmed Mr Habernathy, physically shaking. “It appears from nowhere, its long snake like arms, or legs, seem to want to latch onto my head. Probably wanting to feed on my brain.”

The witch hunter quickly flicked through pages of an old worn tome, stopping only when he’d found the required page.

“Quite so it would seem. Come along, we must not dawdle.”

Mr Habernathy stood startled and still shaking, “You are going to exercise it right?”

“On the contrary my good man, we’re going to feed it.”

The jellyfish like entity, or Mind Flayer as they’re referred to in arcane writings, was exactly where Mr Habernathy had last seen it, floating above his cooking pot warming itself on the flickering flames.

“Oh you’re a beauty!” gasped the Witch Hunter in awe. He approached cautiously, removing his hat in the process.

Long tendrals began to reach out as he got near, clamping down as he allowed them to touch his head. Once connected, the once translucent feelers began to shimmer an iridescent cacophony of colours.

“Are you okay?” called out Mr Habernathy, who had been hiding, but watching from the otherside of the partially open door.

“Quite,” came the reply. “And you would be? In fact, where am I, and what’s that above your head?”

First, there was nothing.

Then there was pain, like a knife cutting deep into the very fabric of my chest and moving down towards my stomach. My eyes flung themselves open but I could see nothing. Everything was black.

I felt my insides being twisted and pulled, as if my very core was being removed by unseen hands. The pain was now unbearable and my eyes closed drifting me away to nothing.

Time passed in limbo, feeling and sensing nothing. Then my eyes opened.

I was in bed, in my room. Just as I remember before falling asleep. There were remnants of sweat on my brow and a dull ache in my chest. I looked down to see nothing but a very fine scar, about the width of a hair running the full length of my body.

What had happened? How had it happened? Was I awake in a dream or dead and remembering? Outside it was still dark, and I’ve never been more afraid of it than I was right then.